Serving You is the Key to Our Success

Way back in 2004 when I first opened our store to serve wildland fire fighters, the web was still in its infancy. We were trend setters starting off with a website, in comparison to the standard catalog. After a year or so, I realized that you could not make a living just selling PPE to wildland firefighters. We needed to find out how to offer our customers more. But where do we start?

The first chief called to purchase PPE from us. He liked our services and wanted to place a hose order with us, but we didn’t offer hoses. The second chief called and wanted a portable pump for wildland use, but we didn’t sell those yet either. So, I went on a search for a hose and a pump supplier. The answer came fast and was obvious; Mercedes Textiles. They had hoses and own Wick pumps, they’re the one stop shop in this field. We partnered up with them and have made history ever since! I thought the store was complete and we were done for the first time.

One day I thought: why not become a distributor for another manufacturer’s skid unit and demo it as I go? We could offer an even more complete line to our customers. So, I set up demos and interviews with 3 manufacturers. At this point, with my field experience with the Forest Fire Service as an Engine Boss, the #1 most important requirement I had for a skid was a manifold.

When we worked day to day, especially mutual aid with departments, manpower was always short. What I saw was needed was a skid unit with all the valves clearly located in one spot, so anyone on the job could walk up and operate the pump unit if the operator was out on a hand line.

Support Along The Way

My dad, a lifelong self-employed business man/entrepreneur as well as one of my mentors, kept telling me; “son, you’re a welder by trade, just build your own!” I should have listened to my old man in the first place. This is where the story goes sideways. Two of the manufacturers I met with went south and one went out of business within 2 years. The third largest supplier back in the day missed/cancelled three separate appointments to demo. Another lesson my dad taught me was to never bad mouth a competitor, just tell a customer what you can do. Well those circumstances virtually put us in the skid business.

I thank the Chief of the Thompson VFD for having the confidence in us to allow us to custom design and build our first skid unit. We delivered that unit way back in January of 2008. It was the first and only unit we built out of carbon steel plumbing. After that one, we decided that stainless steel was the way to go, which is why every unit since has been built using only 100% stainless steel plumbing and hardware.

We saw the growing need for a UTV skid market. I went back to the drawing board and prototyped the very first “L” Type unit out of plywood. I’m honored that today, over ten years later, multiple companies have copied our “L Type” UTV skid unit design. After all, the saying goes “imitation is the highest form of flattery”, and many people have told me we should have patented this design concept.

In 2010 I woke up with another vision, a skid unit but it’s not a skid, we pull the body and set a tank right on the UTV frame. The tank has a sloped floor in all 4 directions, like a funnel, so no matter where you park off-road you get to use every drop of water. Plus, we mount the pump under the tank, so you never have to draft and gravity increases the pressure of the pump. We called it the Revolution.

After that idea, I definitely thought we had it all, the shop was busy building skids, our line was complete. However, it wasn’t long until the next ‘bird brain idea’ came along. I had been driving Ford F-350’s around for years. One day I thought, what if instead of a pickup with a simple skid on it, we custom built a brush truck? So not only could we show off our skid units but we could load it with all the loose gear we sell and show that off as well. As fabricators, we couldn’t just buy one, we had to build one! Ten years later our IATs (Initial Attack Trucks) do way more than fight brush fires and have made a name for themselves as well.

When I look back now, WOW, those were busy years. I can’t picture how we got it all done, but we did! It makes us see the value in listening to our customers’ needs and humbly accepting of your ideas. I am proud to put my name on a unit that I know will not fail you in your line of work.

Anyway, I thank you for your valuable time and I look forward to shaking hands in the very near future. 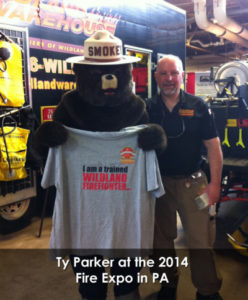